Unconventional road trip adventure. A discontented chef sniffs an alluring aroma and is whisked away on a modern-day pilgrimage. Jerusalem or Bust is a quirky lyrical experience dusted with divine stories served up by a host of zany characters who he meets along the way. This semi-autobiographical anthology film is written and directed by musician Nick Breakspear, assisted by a small army of creative playmates from all over the world – ending with a dreamy feast on the shores of a sacred beach.

Unconventional, musical road trip from creative artist and musician Nick Breakspear. Jerusalem or Bust is a mesmerising exploration of faith, discovery, and adventure in a dream-like-world.

Breakspear stars as himself in a semi-autobiographical journey, playing a professional chef who receives a mysterious package whilst working in a restaurant kitchen – where he overhears a divine voice speaking through a fragrant aroma – the upshot is a hitchhike lift to the airport before the reality-altering adventure really beings.

Made to jump 30,000ft from an aeroplane, he lands in a shipyard and boards a ship captained by a historic sea captain from the past. The crew embark on a nautical journey to Israel and are welcomed by a Bridesmaid with apples and honey. The aroma allures them into the sweltering desert where they encounter a wise Cowboy who shares a biblical story of the Bridegroom Messiah looking for his Bride.

While trekking the arid wilderness, Nick stumbles across Bezalel, a blindfolded artist who is building a heavenly house for the bridegroom and his beloved to inhabit. Whilst the scent of Jerusalem’s golden horizon is inviting, the crew are distracted by another sight in the sky. This begins a whole new journey into No Man’s Land… 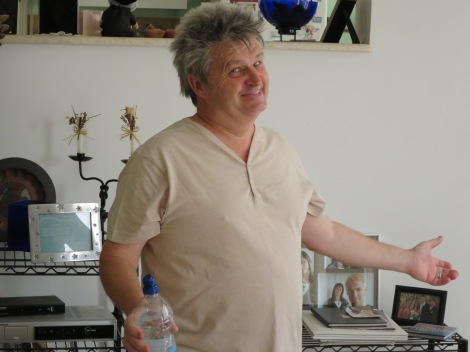 A journey of faith began many years ago with a divine conversation director and musician Nick Breakspear had whilst working as a restaurant chef in Lancashire, England. The outcome of this heart-to-heart with “the management” was that Nick left his work-a-day job allured by the yummiest aroma ever, wafting from another mysterious kitchen.

This whiff, represented in the film, comes from the direction of Jerusalem, so he set off in search of the heavenly sauce! On route, he happens upon a colourful host of characters – be it in the air or by sea or through the burning desert – they end up joining him on this modern-day pilgrimage with an ancient twist – to go up to Jerusalem, or Bust if they don’t!

Regular signposts are useless on this journey!

The only clue you’ll get is this? You’ve got to be able to smell the aroma to know which way to go – because it’s coming from an eternal kitchen where Chef de Cuisine of all time is cooking up a fabulous wedding feast.

Nick Breakspear Jones is a musician, artist and filmmaker from Bury, England. In 1991 he began creating his own peculiar brand of musical expression known as Breakspear. He set off gigging around the globe – performances where often zany and extravagant – never afraid of venturing out onto the emotional edge of life’s delicate branches to share his poignant stories – producing 6 Albums along the way, most notably The Mishkan, Fishing in the Deep and In Pursuit of Tal.

In 2003 whilst visiting with friends in Israel, Nick met Valerie, an 86 year old Holocaust survivor. Her story of pain, strength and survival inspired him to make his first feature film – Valerie’s Orchard, an unconventional documentary about his experience of hearing her story.

The success of Valerie’s Orchard, saw Breakspear commissioned to build a video art installation as part of the Walking Through Windows Exhibition at Liverpool Anglican Cathedral. The week-long presentation celebrated historical women who changed society. His short film borrowed the track Coro-gated (1997) to depict the short, but inspirational life of Liverpool’s first paid nurse – Agnes Jones.

Still working with the touch of the eccentric, Breakspear was invited to the World Christian Gathering of Indigenous People in Jerusalem in 2008 where he met Gloria Miller, an Australian Aboriginie. Their friendship inspired a new story – Stones from the Staircase (2011), primarily filmed in the South Pacific and a significant thread that is still moving through his work today. Breakspear performed and premiered the film at Kaal Corroboree in Perth Western Australia in 2011.

After making musical appearances at Musalah in Bolton, a middle-eastern reconciliation conference (2012) and APPA Gathering Pennsylvania (2013), Nick got to work on his most ambitious film project to date, Jerusalem or Bust.

Dave Baker has been a long-time collaborator with ‘The Inc’, initially playing percussion on the track Higher Lower on the In Pursuit of Tal album (2004) and has somewhat taken on a producer role in Breakspear’s films. Dave is an anthropologist at heart as well as a published author, penning the book With a Voice of Many Waters – a collection of thoughts exploring the biblical themes of water.

Les made his acting debut as Captain Pedro Ferdinand de Queirós at the age of 81 in Breakspear’s Stones from the Staircase (2011). Yorkshire born and bred, Les worked in South Africa for 40 years in the textile trade and way after retirement he caught the acting bug and travelled to Israel a couple of times for filming before passing in late 2016.

Paul Saxon is a singer song writer and worship leader from Bolton, Lancashire. He has spent the last three years recording his third album Looking for the Wonder World. Saxon plays the role of “Sparrowlegs” the first hand to The Captain on the Next Wave, he also contributed his musical talents throughout the film.

Born in South Africa to English parents, Sarah grew up with a keen interest in Performing Arts and moved to the UK to study at the University of Cumbria and trained with The Message Trust in Manchester. Sarah works as a Youth Minister in Bolton where she lives with her husband Paul.

Andy Green is an experienced music producer, arranger and keyboard player with a wide variety of projects for music for film and television to his name. Andy runs Cornerhouse Productions near Manchester with his wife Wendy.

Described as “one the finest musos in Christendom” by Cross Rhythms, Woodman is an accomplished guitarist, singer songwriter, worship leader based in Manchester and has worked with a diverse array of artists, including the World Wide Message, Doug Walker and Lonesome.

Trained in a UK theological college and became a media director of a Christian TV and radio company in India. Prem is a talented vocalist and percussionist and is now pastor at Champness Hall Fellowship in Rochdale. He released the album Slaakiyam in 2008.

Elaine is an internationally renowned Gospel singer and music producer. Elaine first worked with Breakspear on the album Fishing in the Deep (1997) later on down the line she put in a fabulous lead vocal on Prodi-girl which featured on the album In Pursuit of Tal (2004). Hanley now leads a community initiative called Out of the Box Music Arts, in California which provides opportunities for people from varied backgrounds to make music.

South African born Shoshana appeared as a young girl in Breakspear’s debut film Valerie’s Orchard (2006) and is daughter to well-known artist and sculpture Baruch Maayan. Shoshy plays the part of a Bride-to-be, encouraging  us through her enchanting vocals – she gives lift to tired feet that still want to fly.

Baruch Maayan developed a love for fine art at a young age when he drew his friends and teachers in the classroom, since then he has carved out a distinguished career, crafting bronze sculptures and paintings illustrating scenes from the Bible. View his work exhibited at the Hotel Gilgal in Tel Aviv.

Born in the Netherlands, Arthur Du Mosch travelled to Israel to study agriculture. He worked at the Jabon Blaustein Institute of Desert Research in Sde Boqer where he now resides with his family. Du Mosch is a licenced tour guide and takes visitors into the wilderness of the Negev Desert… oh, and he once caught a leopard in his bedroom with his bare-hands.

Andy Raine – Man in the field

Andy Raine lives on the Holy isle of  Lindisfarne in Northumberland and is a founding member of the Northumbria Community  Andy is a creative firebrand – amongst his may gifts as a poet and writer he leads expressive dance workshops and rights of passage encounters, he is  co-editor of the ambrosial Celtic Daily Prayer book, as well as a lover of coffee and Guinness.

Martin is a founder of Voices from the Nations, a charity organisation for musicians and artists to use their talents to bring hope and reconciliation in places of conflict. Donations to the VFTN charity help transform communities, house children, dig water wells and supply medicines. It was a real privilege to have Martin share his percussive talents with our little gang of bashers, the fruits of this hotspot can be heard on the soundtrack DMZ.

Born in Los Angeles, USA, Gary founded the Place of Stories in the Galilee, with his wife Cindy in 2007 – a home for creative writers to work and gain inspiration. The Breakspear crew took advantage of their hospitality on a couple of occasions. As an actor, he appeared in hit TV shows such as Dallas, Cagney & Lacey, Knots Landing and Life With Bonnie. Gary sadly passed away in early 2017.

For more up to date news on all things Jerusalem or Bust, check out the Production News blog.

One response to “Jerusalem or Bust”